By Peggy Collins in
11:40 PM 10
The MASH UP is BACK!
Attributes
Name: Ricardo
Species: Armadillo
Occupation:  Pizza Delivery person
Location: Hot Air Balloon
TIME: 1 week to produce the illustration and story, completely unaware of the goings on of the other creator - the result... magic!

Every day, Ricardo the Armadillo stood by his clay oven in the middle of the desert, perfecting pizza recipes and praying for customers. His termite stuffed-crust pizza with bone-marrow pesto would knock your scales off if you got the chance to taste it. But you wouldn’t. Because Ricardo couldn’t deliver.

Ricardo was small and slow and scared. Not to mention nocturnal. He couldn’t walk half a mile under the hot desert sun with his toppings intact. Whenever a shadow crossed his path, he dropped everything and burrowed into the sand. By the time he peeked out again, his mouse-lover’s special had been picked clean.

He tried underground delivery routes. When the Jackrabbits had a christening, Ricardo made an extra large carrot and sunflower pizza with strawberry crust. He burrowed it to the church as fast as he could, sand-swimming furiously with the pizza tethered to his tail. But by the time he arrived, the party was over, the pizza was dirty, and the Jackrabbits didn’t appreciate the extra worms. 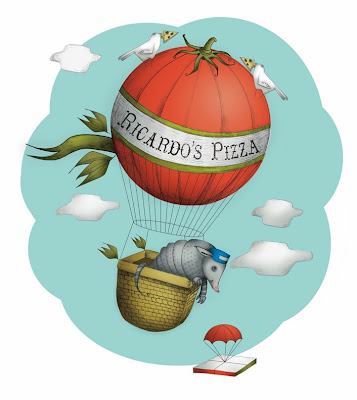 He tried using an armoured pizza box. For the Bobcat wedding, Ricardo made a prairie dog pizza with aardvark hearts and anchovies. He curled into a ball and rolled along with his pizza bouncing safely behind him. But by the time he arrived, the pizza was steamy and soggy and turning green. The bobcats refused to pay unless it came with a free armadillo.

Ricardo made one last attempt to deliver pizza to Sidewinder’s slumber party. He oiled up a rusty bicycle he’d found in a sand dune. He tied a bat-sausage pizza with scorpions to the fender and rode as fast as his little legs could pedal. But his wheels stuck in the sand and a pack of jackals closed in on the defenceless pizza, and Ricardo was left with nothing. No customers. No pizza. No delivery.

He looked up to the heavens for guidance and saw a giant shadow bearing down on him. Fast. Ricardo burrowed into the sand. He felt something land right beside him. It was a miracle. A miracle in the shape of a hot air balloon, with a basket large enough to hold a dozen orders and a burner that could double as a pizza warmer.

The miracle delivery-man walked away without even waiting for a tip. Ricardo thanked the Great Armadillo God and hopped inside the hot air balloon. He hauled in the anchor, lit the burner, and flew the craft home. There he quickly baked two extra-large half-carrion half-clover pizzas on a whole wheat crust. If he hurried, he might just make Raven and Rabbit’s wedding. 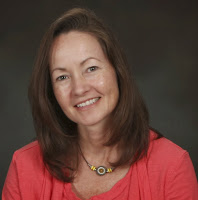 Catherine Austen is the author of Walking Backward, My Cat Isis (illustrated by Virginie Egger), 26 Tips for Surviving Grade 6, and All Good Children. She writes from her home in Gatineau, Quebec.
catherineausten.wordpress.com 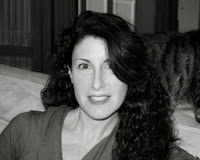 Danielle Arbour - When I received my first paint set at age five, I knew that this was it for me. After studying graphic design at George Brown College, I spent several years designing for some of Toronto’s largest Advertising Agencies before starting my own Children’s bedding company. While illustrating textiles, I discovered my love for storytelling and for character creation. I now freelance as a children’s designer and ebook illustrator in downtown Toronto. When I am not busy working, I spend all of my time being entertained by my two young children and new puppy Lulu.